Celebrating Even in the Struggle

1. Marriage can be hard.

Marriage can be hard. Our marriage is a redemption story. We weren’t unfaithful. We didn’t stray physically or emotionally. But we did lose our way, slowly releasing hands and hearts across the years — my husband to his job, me to our kids. We forgot to hold on. Forgot to reach for one another first when the winds first began to blow and the waves began to roll. Forgot to stand together. Lean in. Hold on. We drifted apart. Wondered aloud if we’d made a mistake in marrying, if we’d chosen wrong.

We stopped dreaming, couldn’t communicate and survived as a couple only because we were each committed. We didn’t feel love. Some days we didn’t even like each other, but we were committed.

We continued to push through, continued to try to communicate, and what we’ve discovered is that we had to learn to give ourselves grace. We’re under a tremendous amount of pressure with four seriously ill kids in their teens and early twenties, and with me, a chronically ill wife. We’re just trying to survive.

2. It’s more about forgiveness than feelings.

This has been tough. Tony and I lost sight of each other somewhere along the way, not intentionally, but gradually. Tony’s life became consumed with work, mine with all the medical – dozens of monthly appointments with dozens of specialists, coordinating medications and treatments, managing prolonged hospital stays, fighting for insurance coverage, and in the midst of it all homeschooling all five kids through high school.

The kids and I lived a life Tony knew little about. He only vaguely understood their medical conditions and rarely attended an appointment. The harder life at home became, the more he poured himself into work. The kids grew increasingly outspoken about his absence in their lives and I grew more distant, and sadly, bitter.

Almost two years ago, with our marriage crumbling and our family life out-of-control, Tony retired early and came home to help. Six months later, he looked at me and said, “I honestly had no idea. I knew our kids were sick, that you’re sick, but I had no idea what you were going through. I lived here and I had no idea.”

I had to learn to forgive before I could heal. I had to learn to see that I too was responsible for where we’d wound up. I had stopped talking, stopped trying to explain, stopped asking for help. I had learned to be strong, to figure things out, to do what needed to be done, but I had also cut my husband out of the equation. The more self-sufficient I became, the less he felt needed. The less he felt needed, the more he poured himself into work. It was a vicious cycle, and the longer it continued, the further we drifted apart.

We needed to learn to forgive before we could heal.

3. Making time for one another is a need.

This has become a non-negotiable in our lives. Almost two years ago, with our marriage at the breaking point, we set up weekly date nights. Many of those dinners were painful and uncomfortable. Some nights we barely spoke. Some nights we argued. Some nights we left the restaurant frustrated and angry. Often, I cried. A few times it took everything in me to stay in that booth all the way through dinner.

And something happened. We began to talk. Really talk. About the good stuff, the hard stuff, the things that hurt. We stumbled through anger and frustration, and found ourselves guarded and uncomfortable, but we kept at it. And we began to laugh, to remember and talk about the good times, about this incomprehensible life we’re living. Sometimes we left the restaurant smiling. Sometimes we dared to remember our dreams.

Some nights the tears were good.

Along the way, we’ve added occasional overnights into our routine. We can’t leave for long – about 24 hours – but it’s enough, and we both look forward to the time away. We don’t do anything fancy. Sometimes we don’t even leave the room. But it’s a respite. Uninterrupted, unhurried, unscheduled.

Time is not a luxury, it’s a necessity, vital to a strong and healthy marriage.

I wish I’d understood the importance of this more than anything else, not because it satisfies desire or keeps either spouse from straying, but because intimacy is holy ground. I’m not sure I have the words yet to describe exactly what I mean, but I know that for us, it has been the doorway to trust and authenticity. Wholly giving myself to my husband has been a vulnerable and beautiful experience, fostering deeper forgiveness and greater grace than any other area of our relationship. That I love my husband more after 24 years of marriage than I did on the day we married, that I find him more attractive at 58 than when I met him at 32, and that we enjoy each other more in middle age than when we were newlyweds, is still surprising. Intimacy really is holy ground.

This something my husband and I are still learning. We each bring different gifts to the marriage and those differences are GOOD. They can be hard, but they are good. My husband sees the big picture. I see the small details. He can sometimes leap without enough information. I can sometimes get trapped in the minutia. My husband is spontaneous. I need time to process and prepare. My husband loves food. I eat to survive. He is great at small talk and making people feel welcome. I am better behind the scenes. I am a taproot – a single root sunk deep. He is a fibrous bundle – with great breadth and width. We need each other. We bring different and necessary perspectives.

Our differences are gifts to be celebrated. We need to thank God for a breadth and depth together we wouldn’t experience apart.
And we need to remember that how we solve conflict, how we handle money, how we use our time, how we clean, deal with pain and illness, how we mark and celebrate holidays, how we dream, what we eat, how we care for family and how we spend our vacations will be different. But those differences, while sometimes hard are also good – a microcosm of the Body of Christ – each a facet, together, whole.

To redeem means to buy back, to free from what harms or distresses, to renew. My husband and I have found our way back to each other. Life is still hard. Our circumstances haven’t changed. But we talk. We laugh. We lean in when the winds rise and the waves roll. We hold hands and pray. We are working, albeit slowly, through a couple’s devotional by John and Anita Renfroe, Songs in the Key of Solomon.

And we’re learning to celebrate – even in the struggle.

A Story of Hope • Sam Re

SUFFERING PRODUCES PERSEVERANCE   The phone rang. It was 3am. “Hello?” “Mom,” my son Sam said so quietly I almost couldn’t hear him, “can you come get me?” Eight months earlier, Sam had walked across the stage in cap and gown, head held high, a smile playing at the edges of his lips and... 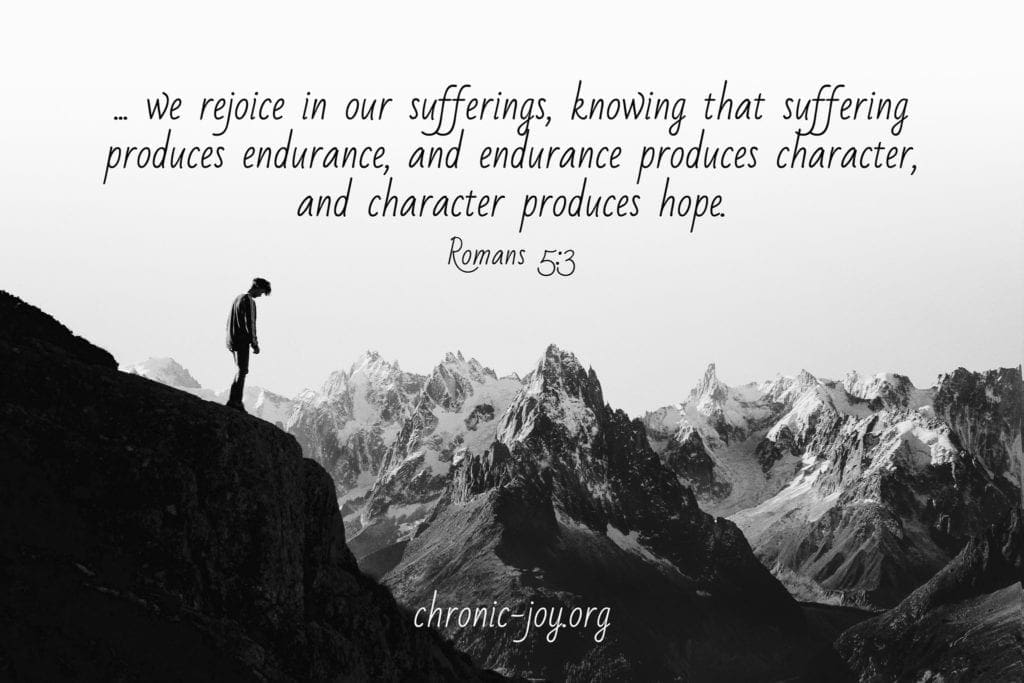 Ready for Spring: Learning to Release What Was to Embrace What Is

I was sitting at a table, laptop open, poetry books, hot tea, notebook, and pen spread before me when I saw it, a bright green dot of light dancing at my feet. Half a lobby away sat my son, laser pointer in hand, chuckling. Minutes later, he crossed the lobby, plunked himself in the chair... 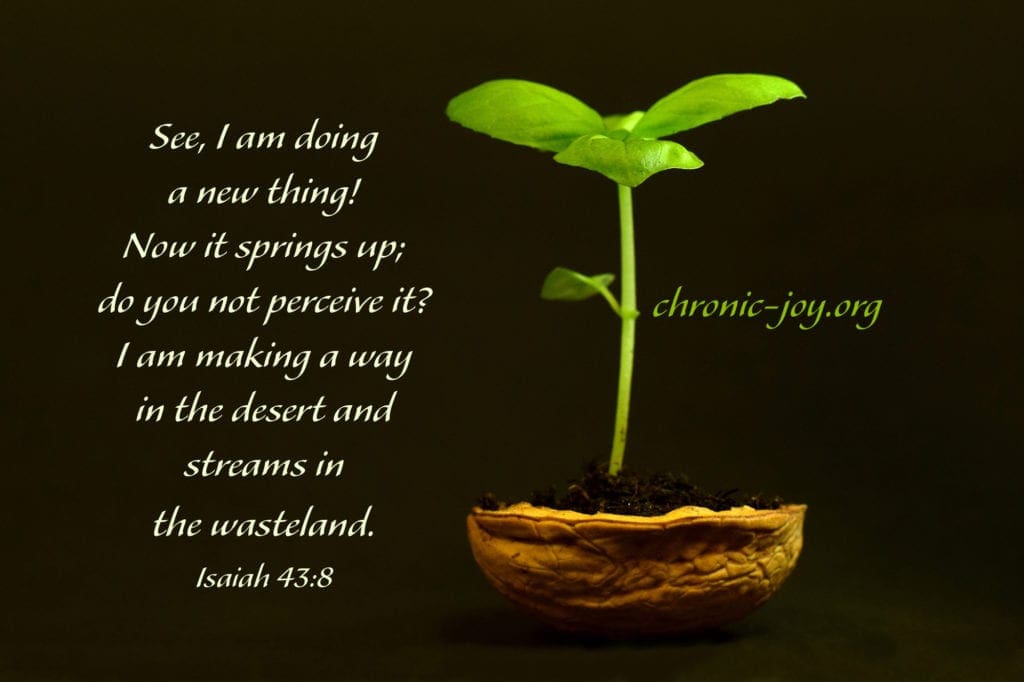 Cindee is wife of the man she loves most in this world, mama of five world-shaking creatives (19-27), author of Discovering Hope, Finding Purpose, Embracing Worth and I Take You in Sickness and in Health, photographer, craver of quiet, lover of cotton, denim, Jesus and tea, and co-founder of Chronic Joy®. Cindee and four of her five kids have Ehlers-Danlos, dysautonomia, intractable migraine, and myriad co-existing conditions through which they're learning the deeper the valley, the greater their capacity for joy.