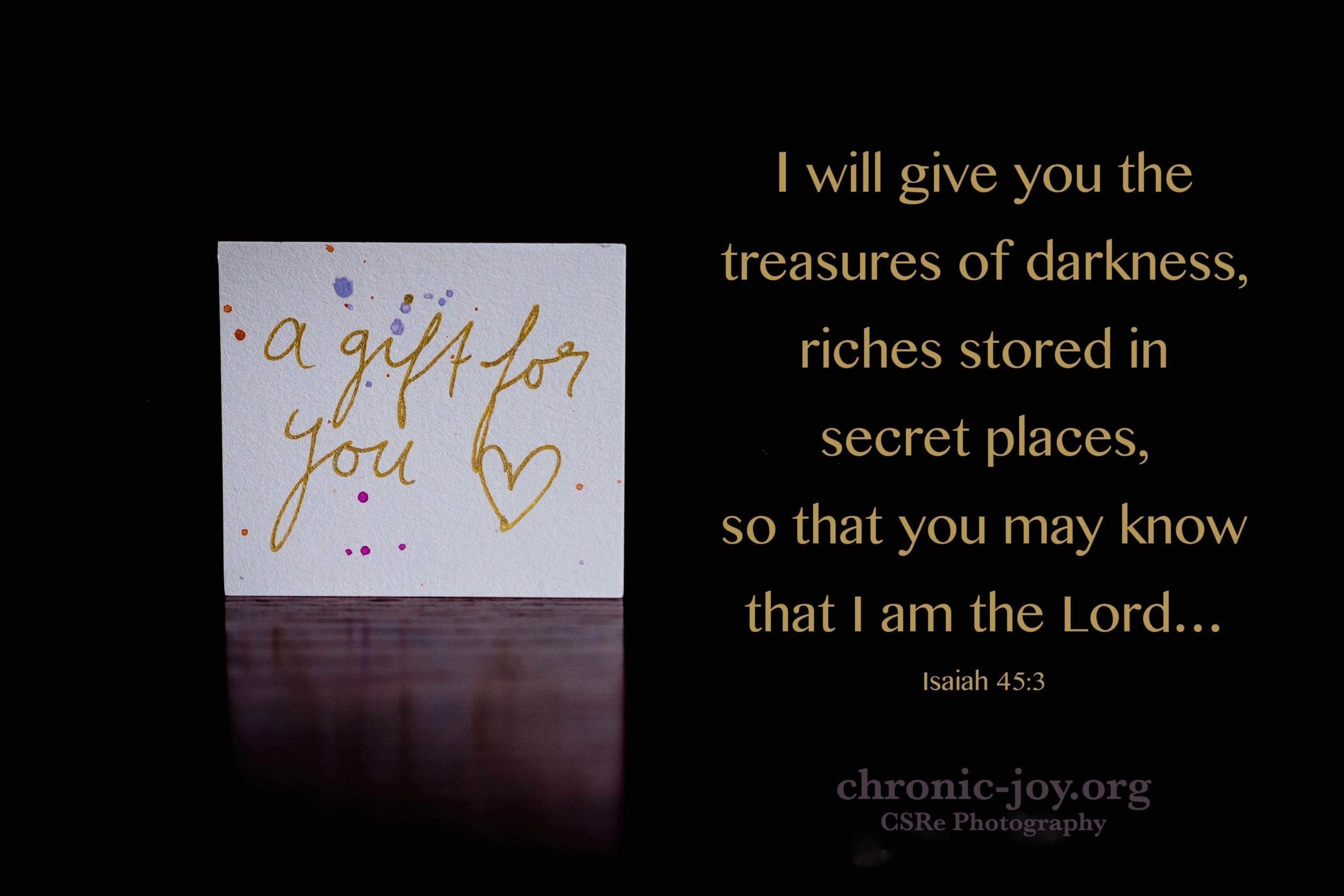 I will give you the treasures of darkness, riches stored in secret places, so that you may know that I am the Lord… (Isaiah 45:3)

Two years ago, I received a manuscript from a woman whose son was battling Leukemia. He was in the early stages of the disease and Lisa’s article shared their journey up until that point. Immediately, my mother’s heart identified with the words on the page and the anguish only a mother knows as she helplessly watches her child suffer. At the time, my own daughter was battling an illness and so began a friendship – a treasure – that the darkness in both of our lives gave us.

Isaiah 45:3 says, “I will give you the treasures of darkness,
riches stored in secret places, so that you may know that I am the Lord…”

We never think, especially at the time, of treasures or riches coming out of the dark places in our lives, but they do. God uniquely desires to use the darkness in our lives to make something extraordinarily beautiful. In fact, it is in these various dark places of brokenness, heartbreak, and loss that God brings forth His light so that even the darkness is illuminated. And it’s not only illuminated, it’s full of treasures and riches – in abundance.

We need God’s treasures in the darkness because they turn our hearts toward Him. When I look back into the archives of the dark places in my life I see all kinds of treasures – treasures of comforting messages from friends and even strangers, a unique intimacy with Christ, God’s Word that reached into my pain birthing comfort and daily strength, a fresh sense of hope, God’s creation reminding me of His power, and unexpected friendships like Lisa’s.

A friend of the great missionary to India, Amy Carmichael, once said,
“The woman who has no experiences in the dark
has not secrets to share in the light.”

Lisa and I became friends through our common darkness. As we continued to journey through our children’s illnesses, God brought us both hidden riches in the secret places. To my great sadness, Lisa’s son, Ben, eventually lost his year-long battle with Leukemia months after we met.

One of the treasures that God gave Lisa and her husband, Dave, in the aftermath of their dark night of grief was a little bird that began visiting them the week of what would have been Ben’s 19th birthday. This was no ordinary bird! Lisa had never seen one like it before. The bird literally hung out with Lisa and Dave, hopping along with them and plopping himself right on the table as they ate. He began pecking at their toes, eating whatever food they threw at him (he was especially fond of watermelon!) As soon as either of them came out into the backyard…there was that bird! And he stayed until they left. He remained “their bird” for an entire week! Fondly, they gave him the name B.B. for (Ben’s Bird). God’s grace was right there in their backyard. Signs, symbols, and touches of His grace are everywhere especially in our deepest darkness. God had sent them a treasure in the form of all things – a bird – to let them know how personally He loved and cared for them, and to put a smile on their grief-stricken faces when the magnitude of their loss was especially great. Then the bird was gone. They never saw it again until…a package arrived weeks later.

Knowing that the first anniversary of Ben’s death would be especially difficult, I sent Lisa a small gift to let her know that she wasn’t alone and that I was praying for her. God led me to give her the Willow “Angel of Healing” figurine. The package arrived and with her girls sitting around the kitchen table, Lisa opened it. In amazement, the girls said, “Look! She’s holding B.B.!” I had no idea about the bird until after the fact and never noticed that the angel was holding a bird. But God knew. Treasures in darkness! He knew what Lisa and her family needed at that moment to turn their hearts towards Him, reminding them that no matter what He was there – His grace was there. He saw their tears, He saw their grief, and He so personally cared about it. Who would have thought – a friendship, a bird, and a gift – would become some of the treasures God would use to bring forth His luminous light in the darkness in both of our lives.

Treasures in darkness – they are all around us, riches stored in the secret places of our souls that are meant to be shared in the light so that our hearts might be turned toward God! What treasures has God placed in your darkness? It’s only in that place of darkness that we get to experience such riches, such treasures. And what a privilege it is to be able to share His secrets in the light!

*First printed in the Summer, 2011 issue of Just Between Us Magazine (justbetweenus.org).

Walking Through Your Child’s Chronic Illness with Hope   “Mom, my back hurts,” my 11-year-old Anna complained. “Did anything happen to cause the pain?” I asked. “No,” she said. Time went on and things seemed to be fine again, so I didn’t think twice about it. But then “my back...

END_OF_DOCUMENT_TOKEN_TO_BE_REPLACED 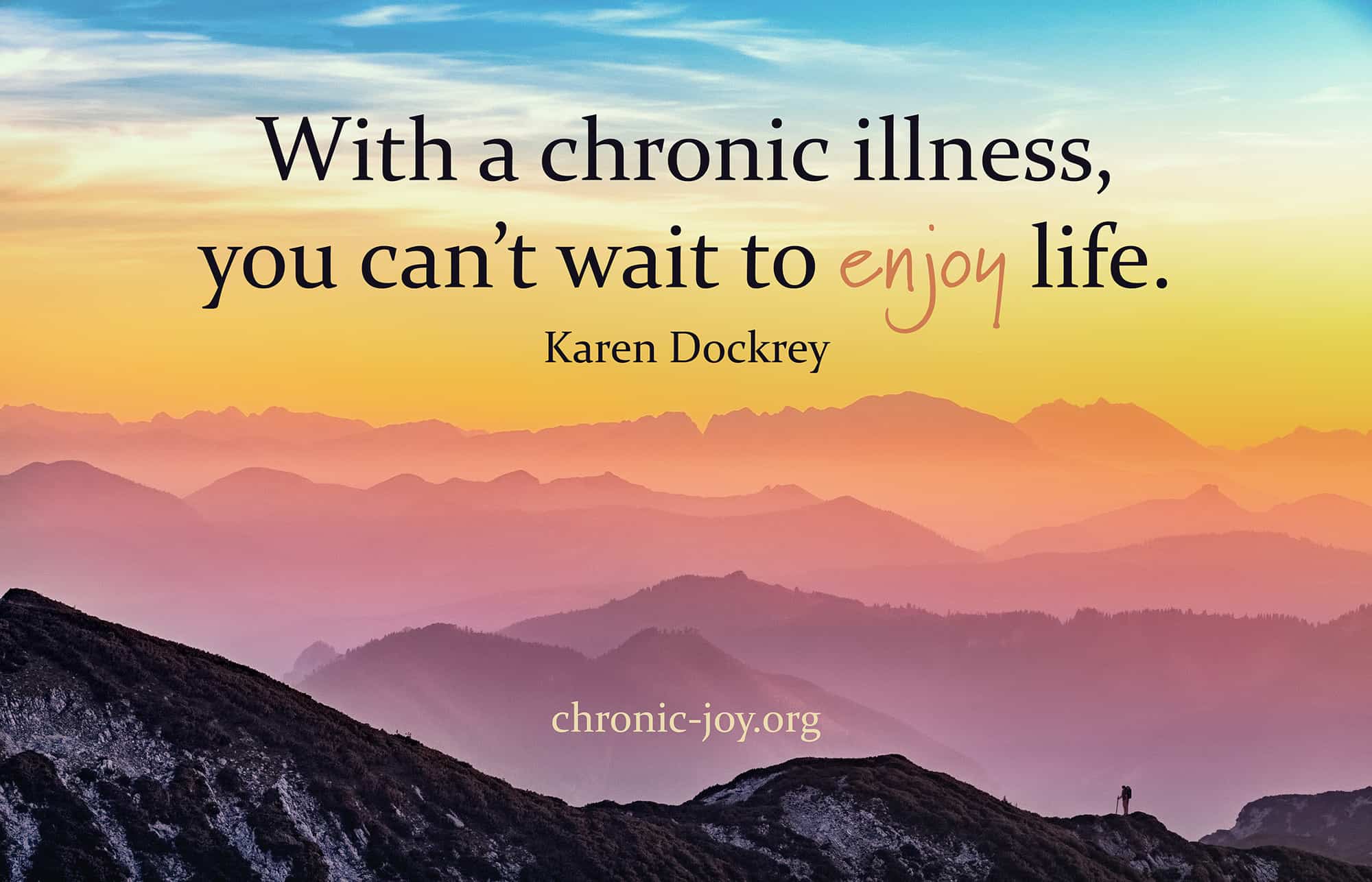 Ken Tada knows what it means to be a caregiver. For the last 34 years he has been taking care of his quadriplegic wife, Joni Eaerckson Tada, who has not only been bound to a wheelchair for the last 50 years, but who has suffered from terrible chronic pain in the only part of her body that has...

END_OF_DOCUMENT_TOKEN_TO_BE_REPLACED 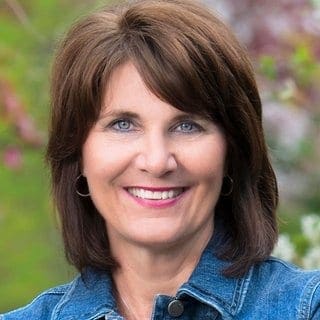 Editor of Just Between Us magazine

Shelly Esser has been the editor of Just Between Us for over 29 years. Additionally, she was actively involved in women’s ministries for 20 years, is an author, and has served on the Board of the Pastoral Leadership Institute. She and her husband have four daughters and a son-in-law, and live in Menomonee Falls, Wisconsin.