Of Bodies and Birds (When God Takes Away Our Health)

I am a helpless creature who must wait on the Lord for every good thing. ~ Michelle Novak

I knelt in the swamp, mesmerized by the creature on the shrub. His strange contortions enthralled me: he was emerging from his exuvia — breaking out of his outer shell, undergoing the change from water-based nymph to fully-adult dragonfly.

I watched for more than hour. It looked excruciating, bone cracking, the outer layer splitting along what we might call the spine. Finally he emerged — at first a faint greenish color not so different from the spent grey insect he was.  When I bent the twig down for a better look he wobbled onto my hand. There, to my delight, he finished coloring to a deeper emerald, drying and straightening his wings. When he was finally erect, the process nearly finished, he rubbed his head on my palm to loosen his antennae, whirred his brand new wings for a few seconds, and flew away. I decided to keep the twig where the cracked and empty shell was still attached.

I understood entirely how this felt: it mirrored my own bone-cracking transformation to wholeness.

I had always been athletic and energetic. I had even been a lifeboat crewman in the Coast Guard, as well as a shipboard navigator who climbed onto buoys in bays and the ocean, using my sextant to fix their position. Even as I approached 50, I still led a vigorous life and was untroubled at the thought of aging.

Until one day. Without warning, my neck swelled up, became hot to the touch, and my head fell over. My neck could not support my head. Afraid to move, I slept that way in a chair only to wake up the next morning with my head rammed hard onto the opposite shoulder, along with a spine-cracking sensation and pain I couldn’t begin to describe.

My head never went back. As I waited months to see a specialist, I thought of obtaining illegal and heavy drugs, or suicide. Mostly, I crawled on the floor, letting my head drop onto it over and over, sobbing and groaning, hoping I would die.

I was eventually diagnosed with systemic dystonia, a complex neuro-muscular disorder for which there is no cure, and very little in the way of successful treatment. The dystonia affects almost every muscle in my body, with constant tormenting spasms in my neck muscles and surprise spasms everywhere else, twisting my spine, wringing it from top to bottom. It rapidly progressed, bringing with it a deep fatigue and a violent tremor in my hands and neck. I had no idea how much I’d be able to do, but I knew my active life was over.

A woman before and after the onset of dystonia

What was possible for me in this new life, this new-old body? If this was how I was going to age, I at least wanted peace of mind in the midst of it. That meant I needed something to study. I’ve always been active both in body and in mind. I love studying languages and have gained proficiency in several living and dead languages, which I use to translate ancient texts, particularly the Old and New Testaments.  I knew if I was going to survive this dystonia, I needed a new mental challenge, but I could only study for short periods. I also desperately needed something to keep me moving. Even the little movement I could tolerate was crucial to keeping as healthy as I could.

One winter morning, as I rummaged through my books, I happened upon my mom’s old bird guide. The cover was gone, and it had seen much use. I smiled as I fingered through it, remembering how she loved to tell me the names of all the birds in her yard, the tanagers, the purple martins, and especially the hummingbirds. She had several feeders set up exclusively for them, and would sit and enjoy their antics for hours. The memory of how bright and happy she became when she talked about the hummingbirds remained.

Then I remembered something else: by then, she too had developed a spastic rigidity in all her limbs and lost most of her ability to move about safely. But she was so rejuvenated when watching or talking about the birds.

I made a decision. I got a couple of feeders and put out some seeds. Soon, the birds came–first the usuals, chickadees and titmice. And then woodpeckers, which fascinated me. By spring I had an aviary only an obsessive-compulsive, twisted central nervous system could dream up! The yard was full of new birdsong and vigorous life.

Most of my outdoor time now was spent slowly working through each feeder, moving, filling and cleaning it. I experimented. I started talking to the birds, and they began to come closer, forgiving the twisted body and maybe even the twisted mind of one who talks to birds.

I learned to listen to the incredible arias of bird language, as they discuss, announce and proclaim their intentions for their every movement and activity.

Many nights I study about them. And since my disease requires me to sit for hours at a time every day, I’ve learned to observe them in their own space through a disciplined, almost athletic stillness, a great accomplishment for someone whose muscles are still yanking, twitching and spasming.

Now, every day a world of creatures alight in my flawed garden to be tended by a wracked body. I know what I look like. I move like someone twenty years older. But the creatures come. They stay. I’m charmed and I feel deep affection for what I never noticed when I could see straight ahead.

When my head was permanently wrenched to the right by the unyielding spasming of many neck muscles, my eyes were re-cast. What was peripheral vision, has become my central vision. Only a twisted body can know it and navigate the world by it.

The direction of my life has been realigned as well. I move sideways. I move slowly, with what might be seen as excruciating deliberation to those who only see straight ahead. But the best part is, I see small. I see slow. What I used to blow by in fast hikes, I now stop to examine, write about, photograph and consider. That’s how I met my dragonfly.

And my chickadee. At the end of May, as I was filling a chickadee feeder, talking as I worked, as was my custom, a chickadee landed on a branch just a few inches from me. He looked at me, his head as cocked to the side as the dystonia had tilted mine. I slowly raised my hand, asking in a soft voice, “Would you like a seed?”

In a moment he flitted into my palm. I liked the soft pinch of his feet and he seemed to like sinking into the flesh of my hand. We looked at one another with the same long quizzical gaze. A few seconds later, he lit from my hand to the tree. We were companions now. I knew he would stand in my palm again. He came because I held my hand out to the birds from January to almost June. In my old life, I would never have had the patience to wait and be still.

As it is with everyone whose soul is hidden in Christ, my brokenness has been redeemed, and I am whole. I’m twisted but whole. I know who I am: I am a helpless creature who must wait on the Lord for every good thing.

And he has cared for me in my new state and allowed me to care for others. I have a pair of robins nesting in my yard that come when I call them. I named them as Adam must have when things were new, and slow, and he had fresh eyes which allowed him to truly see every wonderful creature with which God presented him, creatures who came to him as these come to me.

They wait for the food I give them. They drink and bathe in the water I pour out for them. They frolic and nest in the trees and grass I tend for them. I’ve finally learned why the birds made my mother so joyous, even in her pain and immobility.

And in these creatures I see a new world coming

when my body is made as whole as my soul. In that day,

I will crawl out of my broken exuvia, stand erect

to feed my chickadees with strong, steady hands.

An excerpt from The Wonder Years: 40 Women Over 40 on Aging, Faith, Beauty and Strength. Used with permission.

Michelle lives in Delevan, New York with her two huge dogs, Sundew and Acacia. (Here, on a good day, she is able to sit for this photo.) When able, she roams the hills, swamps, fields and forests of western New York, often bringing back specimens to examine under a microscope. While captivated by birds and swamp-mucking, she is also a lifelong self-taught linguist who is able to translate four languages, including Greek and Hebrew. Most of all, Michelle loves God. 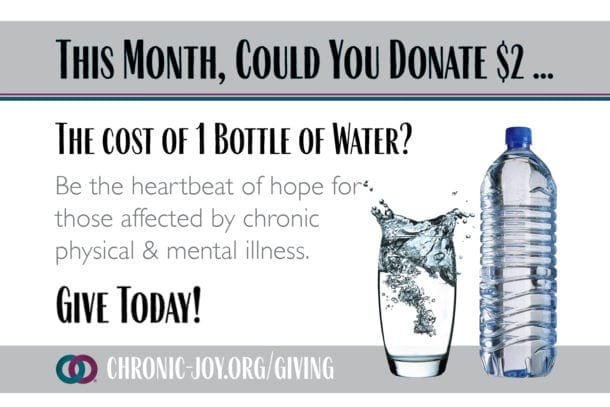 THE COST OF 1 BOTTLE OF WATER?

BE THE HEARTBEAT OF HOPE FOR THOSE AFFECTED BY CHRONIC ILNESS.