Myalgic Encephalomyelitis, or M.E., is a relapsing-remitting illness, much like M.S. This means there are times when the body suddenly crashes with a worsening of symptoms and an increase of disability. This is a relapse. Remission for me is not like cancer remission, where there are no symptoms at all. Rather it means that my symptoms are not worsening, may be gradually improving, or may even be stable.

I had glandular fever (mononucleosis, from the Epstein-Barr virus) in 1997, which completely wiped me out for two months, and then went into remission. I felt like my normal self again, but every time I got a cold or minor virus I felt exactly the same as I did with glandular fever, and it took me much longer to recover from it. My first M.E. relapse came in 2005, though I didn’t realize at that time what it was. One day I woke up and just couldn’t get my brain to focus on anything. I had a month of feeling very out of it and exhausted. After that, I started feeling better, but was not able to function exactly the same as before. I tired more quickly, was only able to work part-time, and was falling asleep during the day. Then in 2007, I had another major relapse. This time my mobility was seriously affected and from then on I couldn’t walk more than 600 meters per day. I became a wheelchair user. In 2008, I had got a little worse and could only walk 400 meters per day.

BED-BOUND TO HOUSEBOUND TO WHEELCHAIR

In early 2010, another relapse, this one left me unable to walk more than 200 meters per day. Then in mid 2010, I gave birth. The physical exertion of labor, though relatively short, triggered another relapse, this time rendering me initially bed-bound then largely housebound. I had a few months of improvement, then in early 2011, I relapsed again. My mobility is now significantly limited – not only can I not walk outside of the house, but even inside I can’t walk around freely. I can only use the stairs once a day, any more is too much effort, and I would risk deterioration or another major relapse. I can sit up for a limited time each day, and I can have about two hours or so of social or brain activity per day (blogging, for example).

LIFE STIRS AT THE MARGINS

In between these relapses, there is a long and painstakingly slow effort to improve. This means sticking very strictly to my energy limitations, making sure I don’t exceed them then gradually, gradually, when I haven’t experienced any warning symptoms, I can push the margins a bit, and extend the time I spend chatting with people, slightly decrease the time each day lying in bed, slightly increase my time sitting up.

These are the clinical facts of the pattern of illness for me. But how does it feel to experience it?

Remission feels like climbing a mountain. Not the kind of Lake-District-nice-day-for-a-walk-kind-of mountain, but proper-Arctic-explorer-type mountain. Or a glacier even, where the ice makes the ascent that extra bit challenging and hazardous. It’s inching along, clinging to rock and ice, sheer effort. It’s hard work and unrelenting, but every now and again you can look back and see you’ve made some progress, and you’re a little higher than you were before. It gets a little easier. You can go slightly faster. You look back and see, “Hey now, I can walk 10 meters a day further than I could three months ago!”

THE GRAVITY OF FREE-FALL

A relapse is like losing your grip and falling from the glacier. One minute you’re carrying on as normal, the next minute you take a step and feel the ground slipping from beneath you.

You get that sickening feeling in your stomach – a mixture of dread and denial then comes the frenzied scrabbling to desperately regain your grip. All futile.

Gravity pulls you over the edge. And you free-fall . . . e n d l e s s l y    f a l l i n g . . . not knowing when you’re going to land or how bad the damage will be when you get there. I think that feeling of terror and the unknown is the worst part. That’s how it felt after I had just given birth and could no longer stand up or get out of bed by myself.  It’s the feeling of, “Is this it now? Is this my new nightmare? Or am I still falling? Is there still worse to come?”

I had this feeling in 2011, when day after day I experienced more symptoms, and found myself able to do less and less. It’s the panic of finding it harder to walk and wondering, “Will I now be unable to walk at all?”

Then there’s the feeling of getting up and coming to terms with where you are after free-fall. The deep disappointment of those small, hard-won improvements, all for nothing. The feeling that you were tricked into complacency, that something has been snatched from you. The fear of having to do life at this new level of disability, of looking up to the last place you were, which seems utterly unattainable now, of not wanting to keep going at this new level, and knowing that you have to.

Replaying over and over in your mind what happened just before you lost your grip.

But replay pointless, because we can never really know.

I’m now in a place where I feel like I’m making some progress, the inching is less slow, I feel more in a rhythm, I can see improvement. Last year, I was in free-fall for two months, before landing in a place of disability so severe I couldn’t conceive of caring for my baby at all. It was, frankly, terrifying.

AND THEN, OF COURSE, YOU DO

And then, of course, you adapt, you surrender, you compromise, you give up on seeing life a certain way, and you slowly, you just do.

Part of me thinks I ought, really, to have got more used to illness by now, more accepting. I want to say something helpful or encouraging about the aftermath of free-fall, with the benefit of hindsight. But I’m not sure if I can. For the moment, I just want to be honest about where I am.

*First published at tanyamarlow.com on March 7, 2012. Used with permission.​

Tanya is an author, speaker, and broadcaster on faith and spirituality. She is also a campaigner for those with chronic illness, disability and Myalgic Encephalomyelitis. Formerly a lecturer in biblical theology with a decade of experience in Christian ministry, she has been published by The Spectator, Relevant, Premier Christianity magazine and others. She admits to a weakness for karaoke, sunny days, and laughing at her own jokes. You can find her in a vicarage in Devon, England with her husband and bouncy son, or writing honestly about finding God in hard places and the messy edges of life at www.tanyamarlow.com.

Be Strong and Courageous

A Sacred Journey Through Suffering: Clinging to God Through Chronic Illness

Suffering is Not Eternal

God of the Broken Beautiful: A Prayer from Jeremiah 29 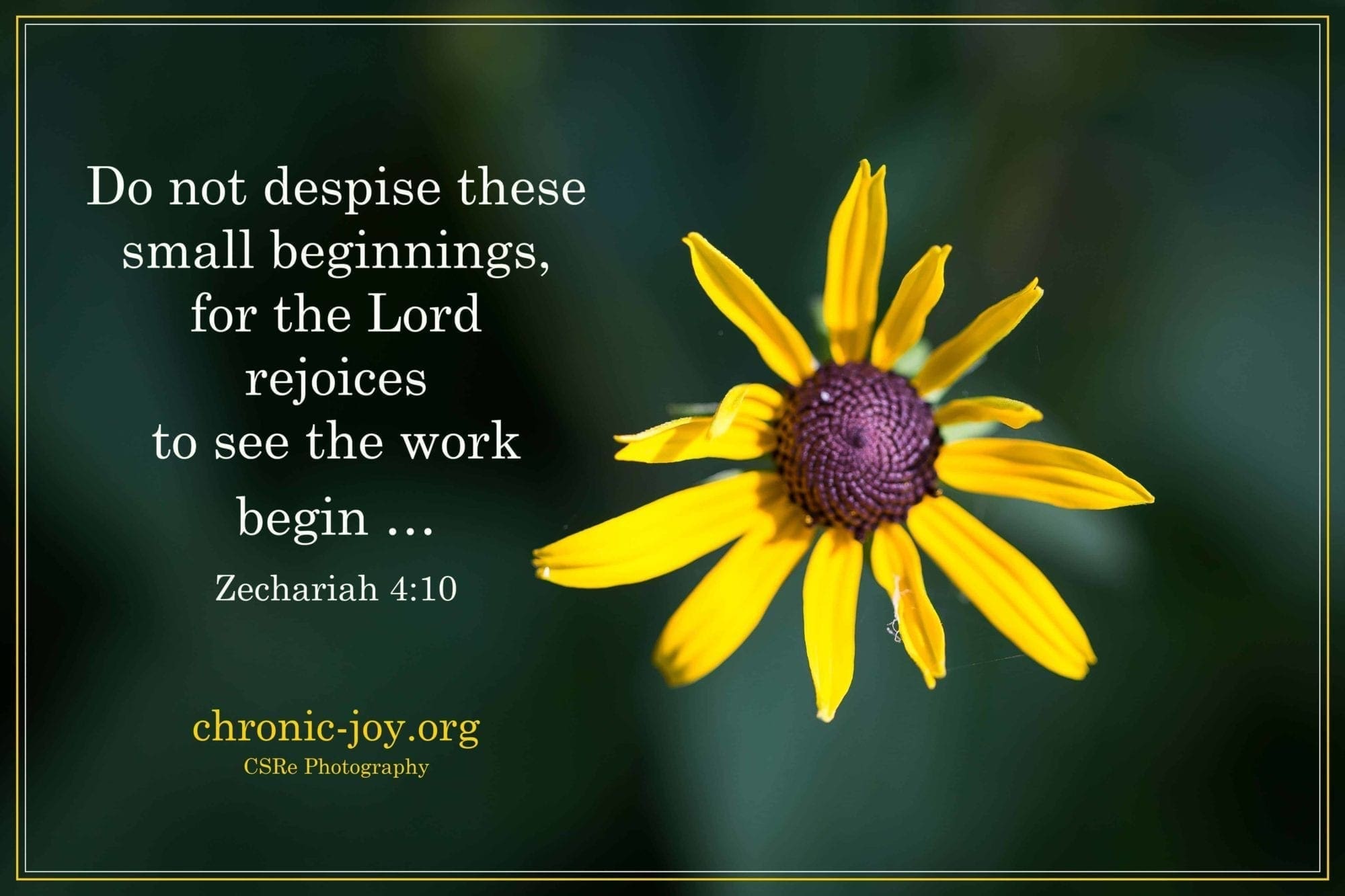 Do Not Despise Small Beginnings

Hidden Wars and Hidden Suffering – This is My Story

The Hidden Smile of God: The Fruit of Affliction in the Lives of John Bunyan, William Cowper, and David Brainerd

John Piper invites you into the lives of John Bunyan, William Cowper, and David Brainerd to discover how God takes the privilege of faith and strengthens it with trials so that we experience a greater hunger for him. The perseverance of these godly servants exemplifies the essential fruit that affliction can produce in your own life.

No matter how dark the days, how wild the storm, deep the valley, or how long the winter, there is hope.

Story is the tale of our lives. And it matters. Chronic illness can be isolating and lonely, but sharing our stories can open a door, extending hope, and sometimes sparking a life-giving, life-changing conversation with someone else along the way. We’d love to hear your story.

We pray and serve, we create and give, and God ignites change one precious life at a time.