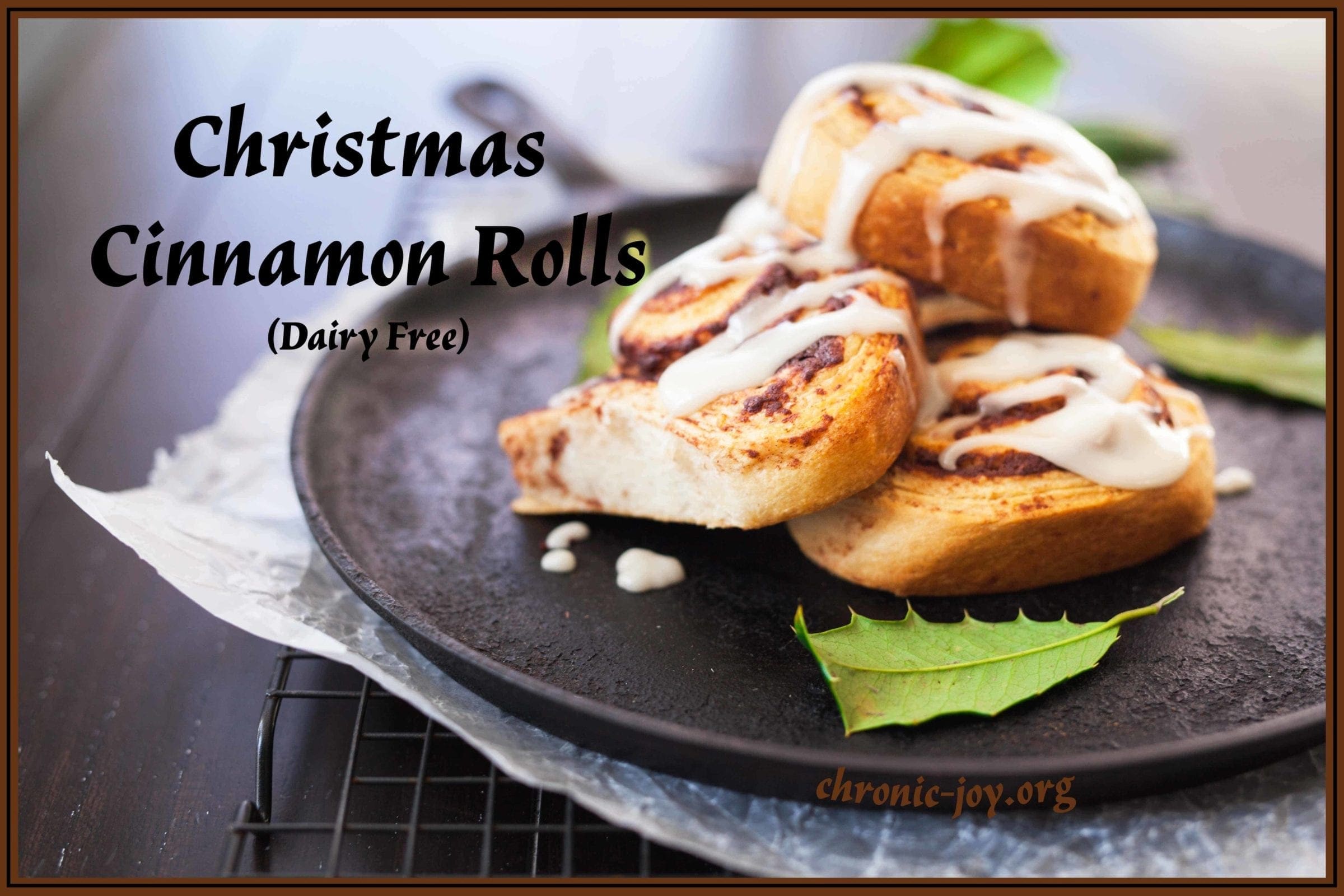 Now imagine you’re struggling with a chronic condition that affects your whole life, including the foods you eat. . . or cannot eat any longer. What was once a part of a wonderful memory now makes you feel ill, confines you to bed for days, or worse. It can be hard giving up favorite foods, but there is hope.

First, you are not alone. There are people who have been, and still are, where you are right now. I met my friend, Cindee when our daughters played on the same volleyball team. Cindee is a delight to be around and always has a breath of joy around her. Out of her struggles with chronic illness, she co-founded Chronic Joy Ministry with Pamela K. Piquette to help others find joy in the middle of their own struggles.

One of the concerns Cindee and Pamela see in ministry is people struggling with all kinds of food issues, especially problems with dairy products. That’s how the idea for this recipe came about. Could I develop a holiday recipe without dairy for their readers? I chose cinnamon rolls because it’s one of those items I sometimes make for special occasions, like Christmas morning; but could I make it free of dairy products? It was a challenge – especially since I don’t bake a lot. Also, most cinnamon rolls have butter, milk, and cream cheese in either the dough, the filling, the icing, or all three. 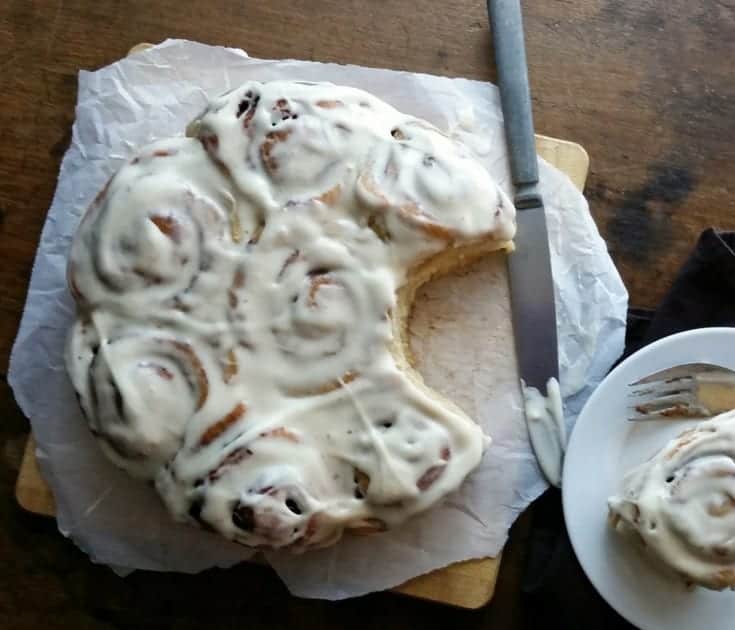 Thankfully, there are non-dairy products available to replace the butter, milk, and cream cheese – and still end up with a wonderfully delicious cinnamon roll. The substitutes I used were coconut oil, Earth Balance Buttery Sticks, almond milk, and Tofutti Better Than Cream Cheese. Using these products enabled me to make these cinnamon rolls dairy-free.

I also replaced part of the all-purpose flour with white whole wheat flour to help increase the fiber content a bit. Keep in mind, though, this is not necessarily a low-sugar recipe. I used as little sugar as I could in the dough and filling, and used a good, fresh cinnamon to add flavor. (Check your cinnamon before using and if it’s on the old side, it pays to buy a new jar of it for better flavor).

The icing was more difficult and harder to keep the sugar to a low amount. However, you’ll notice in the photos that I covered the rolls completely with icing. If you want to reduce the sugar further, just use less by drizzling the icing onto the rolls instead of spreading it. You’ll use less icing, and as a result, have a cinnamon roll that’s still be delectable, but now with less sugar, and still dairy-free.

As for my family, we keep in mind that it’s Christmas, and that these are occasional treats. I don’t often make homemade cinnamon rolls, so we will eat them and enjoy every bite. I hope and pray you enjoy your Christmas – food, gifts, and the real reason for Christmas: Jesus. 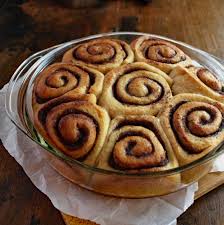 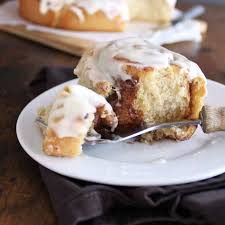 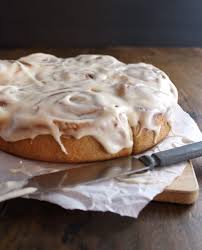 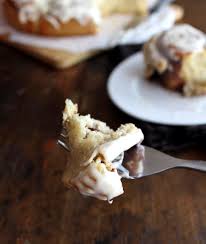 Add warmed almond milk, coconut oil, beaten eggs, honey, white whole-wheat flour, and 2 c. of all-purpose flour. Do not add the salt yet. Mix together until all ingredients are well incorporated. Let rest 10 minutes. (This is so the whole-wheat flour has time to absorb more moisture).

Mix in the salt and ¼ to ½ c. more of all-purpose flour. Knead by hand until smooth, or for about 4-5 minutes using a stand mixer with a dough hook. The dough should be smooth and soft, but not too sticky.

Spray a separate bowl with non-stick pan spray. Drop prepared dough into sprayed bowl and turn dough so oiled side is up. Cover with a damp cloth and let rise in warm area until doubled in size, about 1 hour.

While dough is rising, prepare the filling by mixing together the brown sugar and cinnamon. Make sure 6 Tbsp. Earth Balance Buttery Sticks is softened and easy to spread. Spray two 8 in. round cake pans with non-stick pan spray.

After the dough rises, gently press it down and evenly divide it into two portions. On a lightly floured surface, roll out one portion of the dough into a 13” x 10” rectangle. Evenly spread 3 Tbsp. of the softened Earth Balance Buttery Sticks over the surface of the rolled out dough. Sprinkle with half of the brown sugar-cinnamon mixture, about 6 Tbsp.

Starting along the long side, gently roll the dough into a 10” log, sealing the ends and the long edge by pinching the dough. With a sharp knife, cut the log into 8 slices and place into one of the prepared pans. Cover and let rise in a warm area until doubled in size.

Roll out the second portion of dough, spreading filling on the rolled out dough and rolling into a log as before. Slice into 8 pieces and place in second prepared pan. Cover and let rise in warm area until doubled in size.

After the rolls rise, preheat oven to 375° F. Place both pans in the hot oven and bake for 20 minutes or until golden brown. Remove from oven and let cool.

After cinnamon rolls have cooled slightly, but are still warm, frost or drizzle with icing. Serve immediately.
Makes 16 rolls 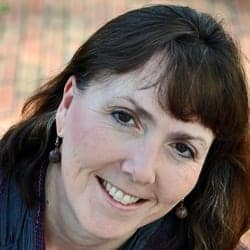 Recipe developed by Marie T. Dittmer, MA, RD, editor and founder of Healthy Ideas Place,  a mom of four who believes balance is a key component in taking care of the bodies God has given us, and that the food we eat should nourish us and provide what we need to live.